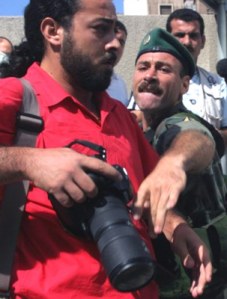 The art of photography played a major role in the lives of many of Ali Lama’s family members. He states that “As a young boy I accompanied my seven uncles to photographic studios to explore the basics of photography. Photography runs in my family, it is an art that I inherited. It inspires and awakens me. My ultimate goal is to master all aspects of photography.” Between 1994 and 2001 Ali was a studio photographer. In 2001 his career took a monumental turn when he was offered a position at Al Sharek and Al Safir newspapers as a press photographer.

When photographing events during war Ali Lama considers his role as a photographer and assisting those in danger equally important, but his employment as a photographer mandates that he take the picture first. As a photojournalist during the 2006 war he was subjected to dangerous situations and daily atrocities. Although his family has the most influential and inspirational affect on his life he does not let their concerns for his safety determine his choice of assignments.

Ali believes that the photographer’s role is to remain objective and deliver the facts. He asserts that “Photos are more influential than written articles”. His moral and ethical standards do not influence his ability to take photographs, but unfortunately, the political precariousness in Lebanon does. In his opinion “The political climate is the determining factor for whether or not I can take a photograph, and whether or not a photograph is published.”

Ali Lama’s message for the Lebanese youth is simple, yet deeply meaningful, “Love each other.”

One thought on “Ali Lama”