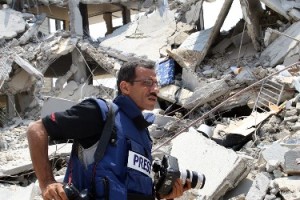 After graduating from Lebanese University , with a major in Business from the Faculty of Business Administration, Anwar Amro secured employment in a government position. After several years as a government employee he made the decision to pursue photography as a fulltime career. In his photographic images Anwar strives to unveil underlying truths buried beneath surface realities. In addition to his photography Anwar conducts photographic workshops that stress development of conceptual intent.

As an adolescent Anwar collected and treasured photographs, preferring being photographed to assuming the role of photographer. Initially he pursued photography as a hobby. Eventually the hobby transformed into a life long career. As his career progressed he developed a passionate desire to immortalize moments in time with his camera. His passion for ‘capturing events’ has, all too often, led him to the edge of life and death during tumultuous military encounters and civilian upheavals.

Anwar’s assignments have taken him to all regions of Lebanon , Russia , China , Jordan , Syria , and Iraq during both times of peace and war. His photographs document numerous bombings in Lebanon , uncountable demonstrations, sports events, cultural and artistic activities, as well as the intrinsic beauty of nature. At one point during the war, while traveling south to photograph, he encountered a mass of frightened civilians running towards him. Unaware of the cause of the fear, he proceeded forward. As a photographer he does not have the luxury to run from danger, rather he must immerse himself in it.

Anwar Amro believes effective photographs incorporate elements that supersede shallow beauty. The suffering of children is often a central theme in his photos. He believes that an image of a child is more influential on the human psyche than any other subject matter. Anwar equates his camera with his identity, to the extent that his wife is jealous of his devotion to his camera. He views the camera as more than an instrument. The camera is his friend, his companion, his infant that he must never abandon. He compares a photographer without a camera to knowledge devoid of imagination.

As a photojournalist his primary objective is to deliver truth. He approaches his photography objectively, abstaining from interjecting personal opinions and beliefs. His political opinions and views are confined to his home. When presented with the choice between assisting someone in peril or taking a photograph he considers it of paramount importance to take the photo first, stating “If I don’t take the photograph I do not perform my job. I am a photographer not a doctor. Although photojournalists are trained in first aid procedures my priority is to take the photograph first and assist the victim second.”

Various regions in Lebanon ban press agencies, unaware that press agencies are not aligned with political factions. The political and social instability in Lebanon has not influenced Anwar’s choice of assignments within the country. As a photographer employed by multiple press agencies he is not limited by regional boundaries.